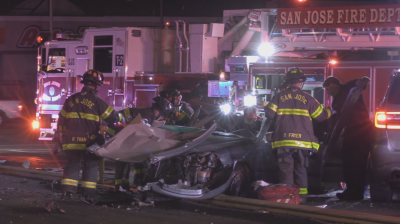 SAN JOSE, Calif.Â -Â San Jose police are looking for the driver of a 1999 Honda sedan who they say was responsible for a three-car, fatal hit-and-run involving one of his two passengers.

Police say he was traveling eastbound on Alum Rock Avenue at Jackson Avenuewhen he struck a 2016 Tesla about 10:15 p.m. on Tuesday.

The Honda continued through the center bus lane onto westbound Alum Rock Avenue where it struck a 2019 Dodge Durang.

Two men in the Honda had to beÂ extricated from the car by San Jose Fire and transported to a local hospital where one of the passengers succumbed to his injuries.

The second passenger sustained life-threatening injuries and remains in the hospital. The driver of the Tesla and Dodge Durango were not injured, remained at the scene and are cooperating with the investigation.

The Honda driver, described in his 40s and wearing a red jersey,Â fled from the scene, police said.

Jesus Ramirez was outside walking his dog when he saw a car speeding, and then when he turned the corner, saw several cars piled on top of each other.

“It sounded pretty loud,” he said. He ran over to the Honda and told everyone inside to relax until the ambulances arrived.

Anyone with information on this investigation is urged to call 911 or contact Detective Brian McMahon or the San Jose Police Department’s Traffic Investigations Unit at 408-277-4654.