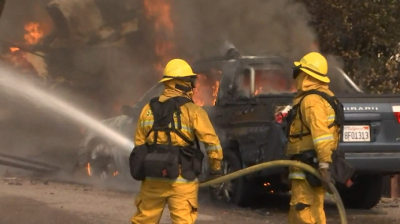 On second anniversary of deadly Tubbs Fire, utility company back in the spotlight

The two year remembrance of the deadly Tubbs fires that destroyed thousands of homes is being heavily overshadowed by the very real possibility of a Public Safety Power Shutoff to prevent another such conflagration. Tom Vacar reports.

SANTA ROSA, Calif.Â -Â The two year remembrance of the deadly Tubbs fires that destroyed thousands of homes is being heavily overshadowed by the very real possibility of a Public Safety Power Shutoff to prevent another such conflagration.

To be sure, Coffey Park will rebuild, but it will never be the same.”No one is ever gonna forget the color of the sky after that fire. The orange sun you know. The masks that we wore,” said Chris Coursey, who was mayor of Santa Rosa, serving before and well after the firestorm. “I certainly learned what it was to be a mayor; to be needed to do that job. I was proud to do that job and I feel lucky to have been in that position at that time when ti was needed so badly,” said former Mayor Coursey.

Still serving Sonoma County Supervisor Shirlee Zane was chair of the Board of Supervisors during the Tubbs fire.

The Luther Burbank Center for the Arts was partially burned during the fire storm and is now the location of a permanent memorial to those who died in the fire.

Nine Santa Rosans were among the twenty-two people who died in Sonoma County.

Time has healed a lot, but not everything. “The first, I’d say six months were real tough. It was hard to go to work. It was hard to just make even and just trying to the basic decisions,” said rebuilding Coffey Park resident Pamela Jensen. “It’s sobering. It’s sobering because we know that there are things that are often out of our control and so, that’s the tough part,” said Zane.

For all the bad things that did happen, something magical happened here and we heard it time and time again.

“I used to walk around a lot and I walked my dog around the neighborhood and know maybe a couple of people. I can tell you everybody’s name up and down this street now and we’re all close friends,” said Coffey Park resident Kevin Johnson.

“We know everybody. We understand each other in way that other people can’t understand us. e pull for each other. We work for each other.” said Coffey Park resident Janet Reisner. “We all actually know each other on a more intimate basis. We belong to a very exclusive and expensive club,” said Reisner’s husband Jack.

Pacific Gas and Electric has now advised more than half of California’s counties that weather conditions and winds are such that Public Safety Power Shutoffs will comeÂ over the next several days, someÂ 800,000 customers in all, at least for now.