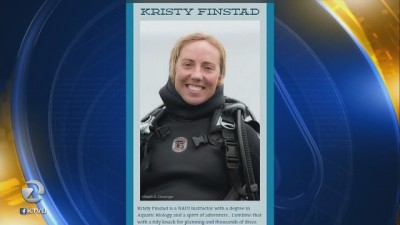 SANTA BARBARA, Calif. (KTVU/AP)Â - Thirty four people are presumed dead in aÂ Labor Day California dive boat fire – with the majority of them from the Bay Area -Â and the search has been suspended, officials announced on Tuesday.

Santa Barbara County Sheriff Bill Brown said at a news conference that the bodies of 20 victims have been recovered and divers have seen between and four and six others in the sunken wreckage, which must be stabilized.

Brown said the recovered remains include 11 females and nine males and DNA will be used to identify them. In all, 39Â people including six crew members, were aboard the vessel Conception when it caught fire early Monday morning while anchored off Santa Cruz Island.Â Â Five crew members jumped in the ocean and were rescued. There are five additional bodies that have been discovered but not recovered.

Flames roared through the boat of sleeping scuba divers so quickly that it appears none of the 34 below deck could escape, authorities said on Tuesday.

Brown said he did not know the nationalities of the victims, nor the exact ages, though he said, anecdotally, he believed there was a 17-year-old and someone in their 60s on the trip.

Brown said the majority are from the Santa Cruz, San Jose and the San Francisco Bay Area.

“This horrific incident is being felt deeply by our community,” Santa Cruz Mayor Martine Watkins said.”We are in disbelief at what has happened and our hearts go out to the families of all those who are waiting for news on their loves ones.”

Pacific Collegiate School in Santa Cruz, a charter school students in the 7thÂ through 12th grades, saidÂ two of its students and at least two parents were on board the boat that caught fire, according to Romney Dunbar, who posted onÂ FacebookÂ that his son attends the school.

The schoolÂ sent a letterÂ to students, parents and staff Monday night saying, “Our hearts are with these two PCS families, and we hope and pray that they are found safe.”

All five members of one Stockton family were killed in the boat fire.Â Susana Rosas of Stockton, California, posted on social media that her three daughters, their father and stepmother were on board.They include Evan Quitasol, a nurse at St. Joseph’s Medical Center in Stockton, her father, Michael Quitasol along with his wife, Fernisa SisonÂ - both former longterm employees of the hospital -Â were also on the boat. The couple had ties to the hospital, described as “former long-term staff members.” Evan’s sisters, Nicole and Angela Quitasaol were alo on the boat.

“We were extremely saddened to learn the tragic news that one of our nurses was on board the Conception,” Dignity Health said in a statement.

Raymond ‘Scott’ Chan,Â a Fremont high school teacher, and his 26-year-old daughter, Kendra, both of Los Altos, died and are among the victims of the dive-boat that caught fire off the Ventura County coast on Monday.

And Worldwide Diving Adventures tour leader Kristy Finstad, 41, from Santa Cruz was also on the boat. Her brother, Brett Harmeling of Houston posted, on Facebook that Finstad is his sister and that she was leading the diving tour.

“No final word on my sister Kristy; however, it is likely she has transitioned to be with the good Lord,” he wrote.

Harmeling described his sister to the Los Angeles Times as extremely strong-willed and adventurous.

“If there was a one percent chance of her making it, she would have made it,” Harmeling, 31, said.

Finstad had done thousands of dives, including hundreds to the Channel Islands, where she first swam with her father as a toddler. She first dove with a tank off Mexico, according to her company’s website.

Her mother founded the diving company in the 1970s.

Finstad studied damselfish and corals in the Tahitian Islands, dove for black pearls in the French Polynesian Tuamotus Islands and counted salmonids for the city of Santa Cruz, where she lived. She also did research for the Australian Institute of Marine Science and wrote a restoration guidebook for the California Coastal Commission.

“My mission is to inspire appreciation for our underwater world,” she wrote on her company’s website.

She and her husband had just returned from sailing across the South Pacific. It was part of their 10-year plan that started on the back of a napkin in 2006.

They left from the Channel Islands in 2015 on the journey, and planned to return in 2018. Before they set off, Finstad wrote: “Our new boss is King Neptune: when it blows we hunker down; when there’s surf we paddle in; when there’s rain we wash up. In terms of time-lines, the best we can do is point in the right direction.”

Findstand also worked part-time for the Santa Cruz’ Water Department from 2005 to 2015, according to a city statement. “She was a gifted interpreter of natural resources,” the city wrote.

The 75-footÂ Conception was on a three-day excursion to the chain of rugged, wind-swept isles that form Channel Islands National Park in the Pacific Ocean west of Los Angeles. The fire broke about 3 a.m. as the boat sat anchored in Platt’s Harbor off Santa Cruz Island.

Coast Guard records show all safety violations from the last five years were quickly addressed by the boat’s owners. Some violations were related to fire safety. A 2016 inspection resulted in owners replacing the heat detector in the galley and one in 2014 cited a leaky fire hose.

This story was written from Oakland, Calif. The Associated Press is contributedÂ to this report.Â