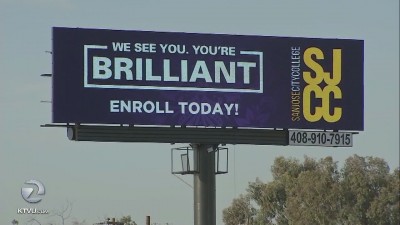 On East Santa Clara Street in downtown San Jose, traditional billboards made of paper and vinyl litter the neighborhood. A billboard sits behind property belonging to Casa Do Benfica, a Portuguese soccer club. Members there call it blight.

âSometimes one is all ripped up,â said Carlos Tavares of San Jose. âItâs an eyesore that is there. I’s been there for many years.â

Other billboards are tagged with graffiti. There is a new plan from San Jose city leaders that could do away with these existing old billboards for electronic, sleeker ones instead.

âProbably the most popular sign in all of downtown is at SAP Center,â said Scott Knies of the San Jose Downtown Association. âYou’ve got the digital kiosk there, billboard, flashing information, color, excitement, it’s almost like art.â

Zelalich shared pictures of what the city is envisioning that includes multicolored LED signs with changing content on up to eight public buildings like the Hammer Theatre, McEnery Convention Center and parking garages.

âWe are in the heart of Silicon Valley, you would expect us to have the most up to date billboards,â said San Jose Councilmember Raul Peralez.

Peralez said some community members have expressed concerns with light pollution. The city is partnering with the Lick Observatory to address concerns, angling the LED lights downward.

âWhether itâs the digital signage downtown or the electronic billboards, they will have a capacity to dim those lights just like our LED lights throughout the city,â said Peralez.

The city is now accepting proposals from media companies. Signs could be up next year and if all works well, the plan could expand to private property.