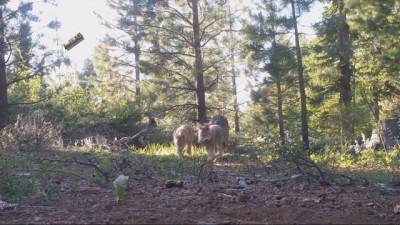 Three new wolf pups were spotted June 18 spotted roaming 100 miles south of the Oregon state line, according to the California Department of Fish and Wildlife.

The agency also released this video of the âLassen Pack,â showing the pups, who were born in April, and two adults playing and lounging in a remote area of Lassen County, a former farming and mining area, which now depends on employment at two state and one federal prison.

The new pups now bring the total number of gray wolves in the state to at least seven.

Wolves have been gradually growing in number across the United States since re-introduction efforts began in 1995 and 1996. Several dozen were brought from Canada by federal biologists at that time and released in Yellowstone National Park and the Frank Church Wilderness in Idaho, reported the Mercury News.

Wolves once roamedÂ across the West, but were killed iby trappers andÂ farmers who fearedÂ they would kill calves or sheep, or that they would eat deer and elk.