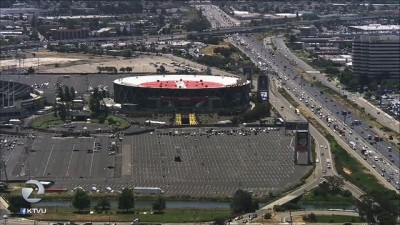 OAKLAND, Calif. (KTVU)Â - With the Warriors soon to be a historical memory in Oracle Arena, what is to become of this massive 120-acre property and the arena itself?

This complex has reached a crossroads: either keep sports there or let generations of sports glory move on.

The arena and stadium complex has already lost so much, that sports consultant Andy Dolich, who served in executive positions NFL, NBA, MLB, NHL, pro soccer and lacrosse, including the Golden State Warriors and the San Francisco 49ers says this.

“There’s a major question mark, no matter how optimistic the city and the county might feel for a future, I actually believe it’s the Cow Palace in training,” said Dolich.


Others say until the A’s issue is settled, forward moves must be cautious.

For sure, count on a lot more special events, especially concerts as in Kansas City’s teamless Sprint Center Arena.

“AEG runs our property and what they have said is one of their most profitable arenas is actually in Kansas City where you don’t have a professional sports team because you have a lot more concerts that generates a lot more revenue,” said Joint Powers Board Member Chris Dobbins.

“We’re also gonna get much more into the sports event business, rather than an ongoing tenant relationship with one particular team or organization,” said Joint Powers Executive Director Scott McKibben.

McKibben says arena football is coming to the Oracle, Dobbins says women’s pro-basketball is another possibility.

“We’ve proven, with all the lousy teams we’ve had for so many years that we have a developed fan base,” said Dobbins.

One fan sees a better path. “I don’t think we should let the A’s leave. The A’s should be here,” said Chris Pickett.

With the Warriors almost gone and the Raiders leaving and the A’s looking to Howard Terminal downtown, this turns a page for the entire Bay Area.

This property represents almost unimaginable potential because it’s so large and so well located.

“The City controls that land use and if that’s what they want, that’s what’s gonna happen,” said Alameda County Supervisors Board member Scott Haggerty.

If the complex is to have a sporting future, Oakland must think big, just like the Giants and San Francisco did.

“If we go back 22 years ago to China Basin, it was Chernobyl without the radiation and now it’s one of the most magnificent sports locations in the world. The Coliseum has the exact same opportunity,” said Dolich.

But that requires as much imagination as it does money as San Francisco proved.