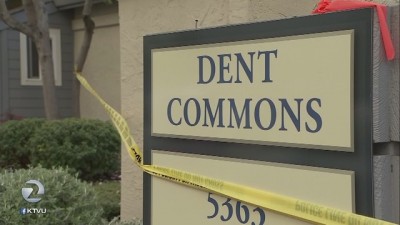 Police responded to the Dent CommonsÂ apartment complex at the 5300 block of Dent Avenue between Blossom Hill Road andÂ Highway 85 at around 12:27 p.m. to a report of a suicide.

Arriving officers found the deceased inside the home. Crime scene tape surrounded the complex where the bodies were found in an upstairs unit.Â  Police cleared the scene around 8 p.m. and areÂ investigatingÂ the circumstances surrounding the deaths. They did not give a motive, but there are no outstanding suspects.

Maria Flores, aÂ neighbor and family friend, told KTVU’s Azenith SmithÂ that the woman’sÂ husband came home and found his wife and their two children not breathing. Flores said the husband had just returned from grocery shopping. The husband could be heard screaming hysterically upon his discovery, according to neighbors.

Flores said a lot of neighbors went to the upstairs unit to help, because the husband said his kids were not breathing.

“He didn’t speak English, so [Flores] said, ‘What’s going on? What’s going on?’ He was doing sign language going like this,” said Maribel Vejar, another neighbor as she gestured by grabbing her neck. “My mom was like, ‘Oh no, I could not go inside that room.’”

Vejar’s mother tried to help the distraught husband as another neighbor stepped in and saw the children in a back room.

“Our neighbor who lives [above] us…he was the one who saw the boys on the bed when they were purple,” Vejar said.

Neighbors at the scene could be seen consoling each other.

Flores said the motherÂ was in her 40s and that her two children were 5 and 7 years old. She saidÂ thatÂ the mom had worked at a nail salon, but lost her job over the summer.

“Apparently depression kicked in,” said Flores. She theorized about what appeared to be a murder-suicide, even saying the mother suffocated her own children before taking her own life. But police did not comment on the case, nor did theyÂ address what was only neighbor’s speculation.

Flores said the family lived at the apartment complex for three years.

The deaths come as a shock to the community. Many neighbors said they saw no warning signsÂ  but that the children were often seen playing outside. Flores said she saw the kids playing outside with their mom as recently as Sunday.

“It is emotional because I did have a lot of moments with the kids because I would always be out with my son when they were playing together. Just to think you won’t see those little boys running around,” Flores said.

Flores showed KTVUÂ photos of the little boys in happier times and saidÂ her son was friends with the two boys, Kevin, 4, and Eric, 7. She said since losing her job, the unidentified mother became a stay-at-home mom.

Anyone with information is asked to contact Detective Sergeant T.J. Lewis or Detective Brian Meeker of the San Jose Police Department’s Homicide Unit at 408-277-5283.