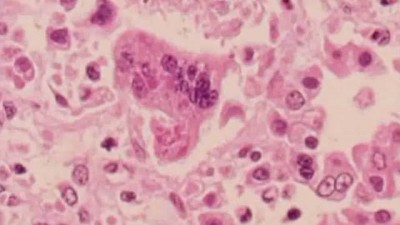 SAN FRANCISCO (KTVU/AP)Â - Health officials confirmed this week at least three Bay Area residents in Santa Clara, San Francisco and Santa Cruz counties have contracted measles, two of them from the other person in the same airplane flight.

In February, a Santa Cruz County resident with measles was on an international flight that landed at San Francisco International Airport, according to the Santa Clara County Public Health Department. Itâs unclear whether that person knew he or she had measles at the time.

Since then, two other passengers on that flight caught the disease â one from San Francisco and the other from Santa Clara County.

In a health advisory issued Tuesday, San Francisco health officials confirmed that a San Francisco adult had been diagnosed with measles â the first in the city since 2013.

The Pacific Northwest in general has seen an uptick in measles as well.

That brings the number of cases in the Portland, Oregon bedroom community of Vancouver, Washington, to 68 – more than 40 percent of the number reported nationwide since Jan. 1, the Centers for Disease Control and Prevention said in updated statistics released Friday.

There have been 159 measles cases identified nationwide through Feb. 21, the CDC said, and Washington accounted for 69 of those. There have been six outbreaks nationwide, including in Illinois, Texas, New York City and Monroe and Rockland counties in New York state. An outbreak is defined as three or more cases at a time.

Most cases in Washington are young children under age 10 who were not vaccinated.

The viral illness has a long incubation period and 21 days must pass without a new case before the outbreak could be considered over in southwest Washington, said Dr. Alan Melnick, public health director in Clark County, Washington.

State legislatures in both Washington and Oregon are considering laws that would remove non-medical exemptions for the routinely administered measles vaccine. Both states currently allow parents to opt out of the measles immunizations if they have a religious or philosophical objection. In 2016, California required virtually all public and private school students to be vaccinated against contagious illnesses.