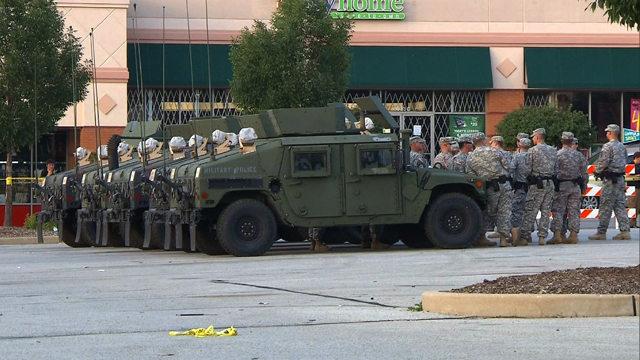 Missouri Gov. Jay Nixon declared a state of emergency and activated the National Guard Monday in advance of a grand jury decision about whether a white police officer will be charged in the fatal shooting of a black 18-year-old in the St. Louis suburb of Ferguson.

Nixon said the National Guard would assist state and local police as needed, in case there is civil unrest when the grand jury’s decision is announced.

There was no indication an announcement is imminent. There is no specific date for a decision to be revealed about whether Ferguson Police Officer Darren Wilson should face charges for shooting Michael Brown on Aug. 9. The St. Louis County prosecutor has said that he expects the grand jury to reach a decision in mid-to-late November.

Meanwhile, police officials in Ferguson and other cities across America were bracing Monday for possible violence in the wake of the decision, one day after hundreds of people took to the streets of St. Louis briefly to block a major intersection to protest the death of Brown.

Dozens of protesters could be seen lying down in the street outside of a movie theater hosting a film festival, pretending to be shot in an action intended to evoke the memory of Brown, according to Reuters.

“This is a mature movement. It is a different movement than it was in August. Then it just had anger, justifiable anger,” DeRay McKesson, a 29-year-old protest leader, told Reuters.

Both protests Sunday, which marked the 100th day of demonstrations, were peaceful.

Residents and officials in the region fear another wave of rioting if the grand jury decides not to indict Wilson.

“We are bracing for that possibility. That is what many people are expecting. The entire community is going to be upset,” said Jose Chavez, 46, a leader of the Latinos en Axion community group.

For some cities, a decision in the racially-charged case will, inevitably, re-ignite long-simmering debates over local police relations within minority communities.

“It’s definitely on our radar,” said Lt. Michael McCarthy, police spokesman in Boston, where police leaders met privately Wednesday to discuss preparations. “Common sense tells you the timeline is getting close. We’re just trying to prepare in case something does step off, so we are ready to go with it.”

In Los Angeles, rocked by riots in 1992 after the acquittal of police officers in the beating of Rodney King, police officials say they’ve been in touch with their counterparts in Missouri.

“Naturally, we always pay attention,” said Commander Andrew Smith, a police spokesman. “We saw what happened when there were protests over there and how oftentimes protests spill from one part of the country to another.”

In Las Vegas, police joined pastors and other community leaders this week to call for restraint at a rally tentatively planned northwest of the casino strip when a decision comes.

In Boston, a group called Black Lives Matter, which has chapters in major cities, is organizing a rally in front of the police district office in the Roxbury neighborhood the day after the grand jury’s decision.

In Albuquerque, N.M., police are expecting demonstrations after dealing with a string of angry protests following a March police shooting of a homeless camper and more than 40 police shootings since 2010.

Philadelphia police spokesman Lt. John Stanford said he anticipated his city will see demonstrations, regardless of what the grand jury returns.

But big-city police departments stressed they’re well-equipped to handle crowds. Many saw large but mostly peaceful demonstrations following the 2013 not-guilty verdict in the case of Florida teen Trayvon Martin, who was shot and killed by neighborhood watch coordinator George Zimmerman. In New York, hundreds of protesters marched from Union Square north to Times Square, where a sit-in caused gridlock.

The New York Police Department, the largest in the nation, is “trained to move swiftly and handle events as they come up,” spokesman Stephen Davis said.

In Boston, McCarthy said the city’s 2,200 sworn police officers have dealt with the range of public actions, from sports fans spontaneously streaming into the streets following championship victories to protest movements like Occupy.

“The good thing is that our relationships here with the community are much better than they are around the world,” he said. “People look to us as a model. Boston is not Ferguson.”